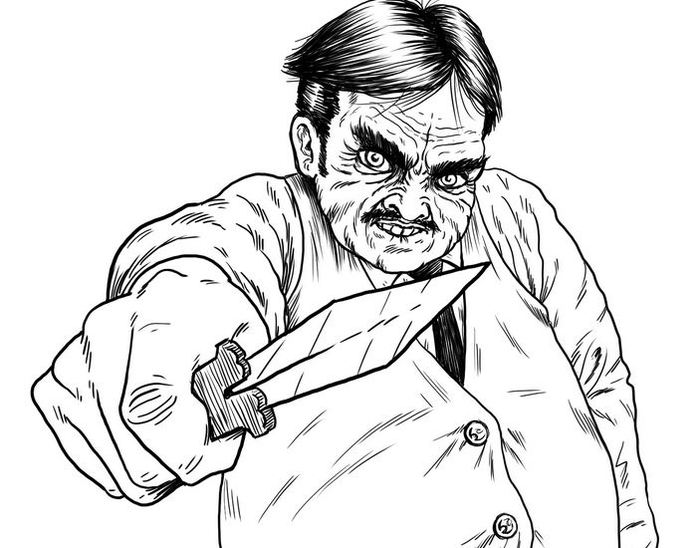 He has such a punchable face does he not? Well, Eddie wasn’t always a bad guy, but that’s another story for a flashback in a future issue of Bust. In our first issue, he’s a poisonous, crazed individual who has spent his fortune on fortifying his home city of Austin, Texas to keep the plague at bay, while positioning himself as the man who holds all the keys. He runs the food and water influx, commands a personal army and imposes harsh laws on his people.

“The gospel according to Eddie Scott.”

Jack and his family find themselves in Austin after trying to avoid the chaos of the streets, and settle down for a while. Jack gains employment under Eddie’s wing and all seems well, that is until the two men cross each other and our hero finds himself slaying mutated freaks in the football stadium. Oops.

Eddie is loathsome, but over time Jack starts to ‘get’ the man, and understands the pressures of what it means to be king.

The question is: If you were the only one capable of saving the world as it fell down around you, could you stomach the responsibility?

That’s all we can say  about him for now.

First off, Bust has received another positive write up courtesy of comic blogger Stuart Anderson, who writes:

“As I was flicking through Twitter this evening I came across a tweet from Dave Cook who was promoting his crowdfunding campaign for his new comic Bust – some things just catch your eye sometimes, I was a little intrigued. After reading the first ten pages of Issue#1 at http://bustcomic.wordpress.com/2014/09/10/bust-issue-1-bust/ – well I was hooked.”

Thank you very much Stuart, both Chris and I are very pleased to have been featured!

I’ve also written an article about Bust for Bleeding Cool, that is now making its way through their submission process. The site does Kickstarter plugs in a really neat way, where they have the creators write the article and submit it with a killer hook.

I called my article “Why I gave up games journalism to Kickstart a comic,” and it goes into my last seven years as a game critic – both freelance and paid – and why I decided to leave that behind to focus on other creative outlets like Bust.

I’ll let you all know if the piece gets accepted, and even if it doesn’t I’ll post it up here for all to see.

Bust page 13 is next to appear on the comic’s blog, and I’m paying for it personally. Pay day is this Thursday so expect it to drop sometime around then. It’s a good one though. You may have seen the rough pencil sketches a few updates back, but this is really the point in the story where our dark, decaying world starts to gain depth, and you see what life is like there.

I’ll post another update once it’s ready and live on the blog.

Blog: How to format your first comic script – guide